This remarkable passage appeared in the Covington Journal of February 22, 1862.

Petitions are being sent to the Legislature of our State praying it to adopt measures to prevent the emigration of free negroes into Ohio. If the abolition scheme of freeing the whole slave population of the South succeed,  we shall then be overrun with this thriftless, worthless population. The fact is, all attempts of the abolitionists to interfere with slavery have only made worse instead of better the condition of the negro. The abolitionists are the worst enemies the negroes have ever had. [Mt. Vernon Banner]

(Note: the use of "emigration" instead of "immigration" and "succeed" instead of "succeeds" were in the original article. I chose not to clutter it up by using "sic.")
---
Though I have read or heard it before, I still find it remarkable that anyone could consider abolitionists to be the "worst enemies" of African Americans, especially those enslaved. Even though freedom could be tough for formerly enslaved people to enjoy, to think that those supporting that freedom were worse to those people than slave owners, masters, overseers and slave hunters is tough to comprehend, but perhaps that is a bit of "presentism" influencing my gut reaction to this message.I do not live in an era where the inferiority of blacks is assumed, and the writer of these comments seems to believe that African-Americans would be worse off without thoughts or hopes of freedom (or freedom itself) being so frequently mentioned to them.

That way of thinking, though, may be part of the other noteworthy aspect of this message - it was from a Northern newspaper that was referring negatively to African-Americans and resorting to negative stereotypes. Students of the Civil War should (and many or most probably do) realize that racism was not just a "Southern thing" even though slavery only existed in the south. Many people in the north did not like African-Americans better than southerners did. Even some people who disliked slavery had difficulty imagining how whites and blacks could co-exist, Abraham Lincoln among them. Maybe this feeling towards African-Americans explains why the writer thought that people trying to help African-Americans were their "worst enemies."

Mt. Vernon is located in central Ohio, as the below map (courtesy of wikipedia) shows. Some information about the Mount Vernon Democratic Banner is also available. 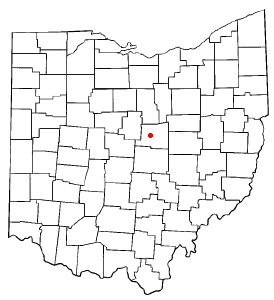