NY Times Disunion Blog: Fall of the House of Underwood

The Fall of the House of Underwood is an excellent story from one of the blogs I try to read frequently about one specific example of the mixed sentiments (Union or Confederate) that existed among people in Kentucky (even slaveholders) and some f the reactions to those feelings.

Many Kentucky slaveholders remained loyal to the Union when the war started, feeling that keeping the Union together would be the best way to protect slavery, while rebellion would most likely lead to the end of the institution. As I've mentioned before, Creating a Confederate Kentucky by Anne Marshall does an excellent job of explaining this.

Unfortunately, this incident in early 1862 destroyed the Underwood estate before the Emancipation Proclamation and the use of African-American soldiers became issues for those slaveholders who remained loyal. Some of these started questioning or changing their loyalties because of these issues, thinking the Federal Government had betrayed them. How would the Underwoods, with their apparent strong support of the Union, have reacted to these issues?

I also find it notable that both Confederate and Union soldiers caused much destruction in the area. It was not just one side that behaved more badly than the other, though apparently the actions by men on the Union side did more harm than good to the Union cause.

Here is a map of Kentucky showing the location of Bowling Green. 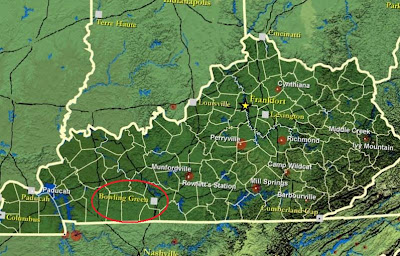