This is not exactly a "Civil War" post, but I found this advertisement in the March 22, 1862 Covington Journal to be worth publishing here. Tom Thumb was one of P.T. Barnum's most famous characters and attractions. It probably was just a case of exploitation of his condition, but that was not necessarily a bad thing in that era. Anything for a buck was pretty much fine (especially considering people still bought and sold other people as if they were cattle or other property.)
-- 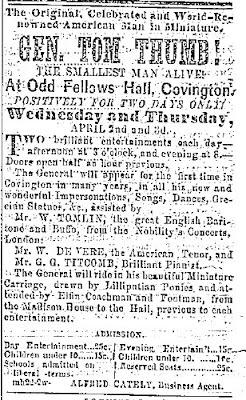 Two brilliant entertainments each day - afternoon at 3 o'clock, evening at 8.
Doors open half an hour previous

The General will appear for the first time in Covington in many years, in all his new and wonderful Impersonations, Songs, Dances, Grecian Statue &c., assisted by:
MR. W. TOMLIN, the great English Baritone and Buffo, from the Nobility's Concerts, London;
MR. W. DEVERE, the American Tenor, and
MR. TITCOMB, brilliant pianist.

The General will ride in his beautiful Miniature Carriage, drawn by Lilliputian ponies, and attended by Elfin Coachmen and Footman, from the Madison House to the Hall, previous to each entertainment.

Alfred Cately, business agent
---
This was about a year before his celebrated marriage to Lavinia Warren, as seen in their wedding photo below, courtesy, click.si.edu. 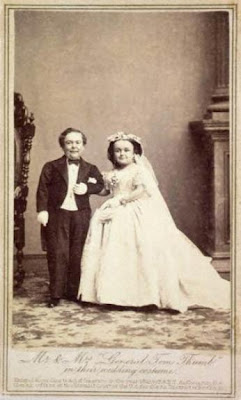