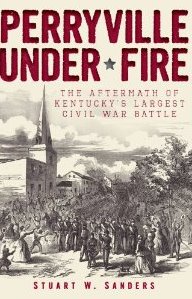 The Battle  of Perryville on October 8, 1862 was one of the fiercest fights of the Civil War, particularly in the Western Theater, according to reports from many of its participants. Thousands of men, Confederate and Federal, were killed, captured and/or wounded during the fight among the hills in west-central Kentucky.

In this book, Stuart Sanders, professional services administrator at the Kentucky Historical Society, briefly describes some of the basics of the fighting but chooses to focus on how the battle affected the town of Perryville and other towns in the region. It is richly illustrated with photographs, though I wish it included a map of the state to show the locations of these other towns in a more visual sense.  Sanders does describe where these towns are, but seeing it on a map may have been beneficial to those not familiar with Kentucky geography.

The author clearly consulted many different sources and that thorough research is evident throughout the book, with the detailed information it provides. This book describes how the fighting caused physical harm to to the town, but when the battle was over, Perryville and other local areas witnessed their churches, schools, homes and civic buildings used for hospitals. Some of these were occupied for several months after the battle ended.

Dead bodies littered the ground and had to be buried; this task fell on the hands of many local citizens. Union troops buried most of their own men, but refused to bury most of the Confederate corpses, leaving this task to civilians.

People not only had their homes and other local buildings used and damaged by the armies, but lost much of their winter food supplies, their clothing and even their furniture. Split-rail fences became firewood for troops on both sides, and livestock became meals for the armies.

Much of the discussion in this book is familiar to discussions of what happened after other battles, as the citizens of the area experienced what many others throughout the continent also suffered during the war years, but this was the first in-depth discussion I had seen of the specific aftermath of the battle of Perryville and I really enjoyed this look. It was really informative to see how this battle's effects were felt throughout Kentucky, into Southern Indiana and even as far away as Wisconsin when residents there learned of this fighting. No other major battle in the west was so close to the "Old Northwest" states such as Wisconsin, Indiana and Illinois, and no other battle allowed residents of those states to visit the battlefield so soon after the fighting ended to try to find their wounded (or killed) relatives.

This battle even spread its effects south as some Confederate soldiers died as their army retreated from Kentucky into Tennessee and were buried along the route.

This book is not long, only 156 pages including the index, but is very informative and well-written. The narrative has a good flow to it and the many illustrations contribute significantly. It does not include a bibliography, but does have a very detailed notes section that shows the many sources consulted by Mr. Sanders.

I am happy to recommend this book to students of Perryville, of Kentucky history, or of the Civil War in general. It is a good book that provides an important and new perspective about how this fierce fighting in a small Kentucky town had long-lasting effects, even on non-combatants.

Disclaimer: I have met the author on a few occasions and have corresponded with him in his professional role on several times. Despite this, I have attempted not to allow this pre-existing relationship to affect my review, but do feel it is important for readers to know of it.