Well, I survived my trip to Perryville, the long walk among all those  hills in 90 degree heat and then the planting of 6 acres of corn by hand the next morning. It was good that so many people (including a local group of "Future Farmers of America") turned out to help with that difficult task. It is no small, flat cornfield. Hopefully the deer and birds leave it alone enough so that the re-enactors can enjoy crashing through it in October. I must admit that seeing so much ground ready to be planted really helped my understanding of the battle. I knew of the cornfield and the fight through it, but I had somehow pictured it as being a much smaller field, at the bottom of the hill, not such a large span of land, including on the sides of the hills. That perspective gives me a much different view of how hard the fighting was in that area and the struggles of the 21st Wisconsin, other Union forces and the attacking Confederates faced. I am still a bit amazed by how different my understanding became once I saw the size of the cornfield.

I must reiterate how beautiful that park is. Kurt Holman, manager of the site, and his staff have done a terrific job, especially considering the budget challenges they (with other state agencies and parks) face. Thanks to the Friends of Perryville for their incredible work too, such as organizing the planting of the corn. It takes a true love of what they are doing to do that much work, on a volunteer basis, with little or no recognition. I have submitted my membership request to that group and hopefully will be able to provide at least a little bit of support to them and their great cause.

I was fortunate in my walk on Friday to visit parts of the battleground I had never seen before, namely the area around the Wilkerson House Wilkerson's Road. Like the rest of the field, it was hilly terrain, tough to cross, but very scenic and enlightening as to the challenges the soldiers faced. I wish I had made it to the stop called "Final Union Line" but my legs were not up to the challenge that the long, steep hill presented. I had brought plenty of water to drink, but the heat, hills and distance did certainly encourage me to head back to the parking lot at this point.

I also made it on foot to the Dixville Crossroads, as my final stop of the day. I had visited before by car, but never figured I would walk that far. It was where many of the Union wagons and supplies were kept on the day of the battle, and was the area the Confederated aimed to capture. Union reinforcements came to this area and did enough to delay and stall the Confederate attack until nightfall came and the battle virtually ended here. The Union had maintained this key area, thanks to timely help from the men of Colonel Michael Gooding.

That was a good day of walking and exploring for me, but the next morning was a challenge as well. We planted 6 acres of corn on hilly ground, as pictures will show. Though we started around 9:00 in the morning, it was already getting warm, and that only made the challenge tougher. Of course the bag of corn (a small plastic bag from a grocery store) developed a hole in the bottom so I spilled quite a few kernels around the field until I finally just grabbed a plastic cup and poured it in there. Thanks the Friends group for also providing grilled burgers and hot dogs and drinks for lunch afterwards, in an air-conditioned hall.

Here is my photo album on facebook as well as the version on photobucket. I'm sorry I did not keep better notes on what each picture showed, but I tried to add more information on the facebook album. You will see that I like to take pictures and especially like cannons and fences.

Here are a couple of the pictures that I especially liked. (The soldier pictures are from The Civil War at Perryville by Christopher Kolakowski, which I recently finished. I thought that showing those in front of the areas where they died would be interesting. I will publish a review of that book soon.)

Here is a link that I find useful when reading up on this battle, particularly the "battle chronology" offered in the list on the left side of the page. It was only a 1 day battle, and most of the fighting took place in a span of about 5 hours, but it was quite severe and fierce combat, and a lot was taking place. That site provides information of the campaign leading up to the battle as well. 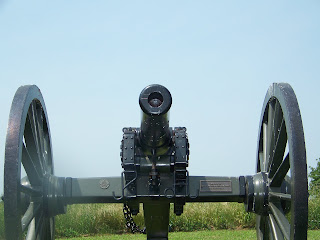 Email ThisBlogThis!Share to TwitterShare to FacebookShare to Pinterest
Labels: Friends of Perryville, Perryville