Some Recognition for the Black Brigade of Cincinnati

One of the more fascinating aspects of the Siege of Cincinnati was the involvement of the group that became known as the "Black Brigade of Cincinnati."  (Please take time to read that last link - it is an online version of an 1864 book about this unit, thanks to the Public Library of Cincinnati and Hamilton County. It gives more details than I do here. Click on the "PDF" link on the page to which this link goes.)

As Confederate troops approached the city and panic began to ensue, many of these men, in a city technically in the north, but with many ties and sympathies lying with the south, tried to join in the action, only to be told words to the effect that it was a "white man's war."

As possible invasion came closer to reality, however, some of the cops in Cincinnati took a different tone and actually rounded up many African American men, and took them to a pen on Race Street (a sadly ironic name), treating them almost like slaves.

Fortune smiled on these men however, when General Lew Wallace, in charge of the Cincinnati and Northern Kentucky defenses per the orders of General Horatio Wright, found out about this treatment and disapproved of it. He ordered Judge William Martin Dickson to take charge of the African Americans and the Judge did so. He met these men where they had been gathered and told them they could go home to see their loved ones and then report back in the morning. Local lore states that about 400-500 men were there that evening but that over 700 showed up the next morning.

Over the next couple of weeks, these men helped build local defensive positions in Northern Kentucky, mostly in Campbell County. They were kept segregated from the tens of thousands of other troops working in the region and they were not allowed to carry weapons, but they actually did reportedly receive the same pay as the white volunteers, which slowly climbed from nothing to $1.00 per day and finally to $1.50 per day. 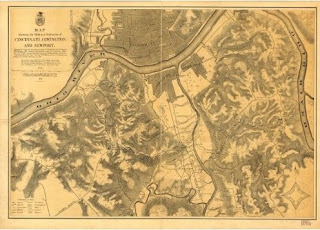 (The above image shows the Ohio River dividing Cincinnati on the north from the northern part of Kentucky to the south, with the Licking River separating Kenton (west) and Campbell (east) Counties in Kentucky. The defensive positions rested on hills and ridges which took advantage of the bend in the Ohio River to form a ring-shaped system of defenses. )

When the panic had ended and the Confederates under General Henry Heth had headed back towards central Kentucky, these African Americans found that their work did not go unappreciated. Judge Dickson, pictured below, even presented them with their own flag, also pictured below, which now resides in the Ohio Historical Society. 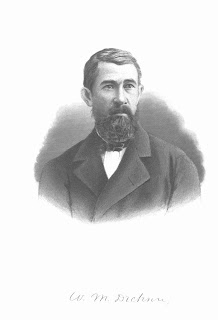 The Black Brigade was not a permanent unit, and it did break up once the panic and expected siege had ended, but several members of this group eventually joined other African American Units, including Powhatan Beaty, who won a Medal of Honor at the Battle of Chaffin's Farm in 1864.

I also find it remarkable that this happened before the Emancipation Proclamation, when the use of African-American troops had not become customary and was still a very controversial topic. Perhaps this was a symbol of how fear can change people's viewpoints, as locals allowed these African Americans to help defend them, when they heard (often exaggerated) reports of how many Confederates were coming and what their plans for the city might be.

Recently, I have seen a couple of articles and announcements about this unit and am glad to see more attention given to this group of brave men. Here is an  announcement about an upcoming dedication of a Black Brigage monument next Sunday. I encourage people to attend this and will try to be there myself as a representative of the Ramage museum. I am anxious to see the new monument and to try to interpret it through not only my initial reactions, but from a "memory" perspective too, to try to see what it says about how this unit is regarded and what the monument designers want people to see and perhaps feel.

The Cincinnati Herald also has a nice article about the recent Battery Hooper Days event and the Black Brigade.

Kevin Levin also had a post about a video about the creation of the monument. I think the video is about a year old, but it still is a nice summation of the project.