John Stewart Hart, the seventh son and eighth child of Benjamin and Anne (Falconer) Hart, was born in Montgomery, Alabama on September 20, 1844. When the Civil War began, he was just 16 years old and John may have watched with envy as 5 of his brothers joined the Confederate army. He did not have to wait too terribly long to join them, however. On June 14, 1863, while apparently a student at the University of Alabama, the then 18-year-old joined a unit known as Storrs' Cadet Corps, which consisted mainly of university students. He was enlisted by Captain Charles Paddock Storrs in Tuscaloosa, though others signed up in Montgomery.

This company served as part of Alabama's coastal defenses before being transferred to the forces of famed cavalry General Nathan Bedford Forrest in October of 1864 as company F of the 7th Alabama Cavalry. It served as an escort for Colonel Edmund W. Rucker. 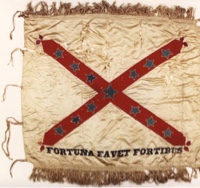 A newspaper clipping on ancestry.com, marked 1931, but with no further source listed, describes a noteworthy achievement for these young men. Here is a partial transcription from the university's website. It reads in part: "At Paris Landing, on the Tennessee river, Storrs' company of cadets accomplished the unprecedented feat of capturing a Federal gunboat which had steamed unharmed past the masked batteries of the Confederates, and they amply rewarded by a splendid feast about to be served to those on board the gunboat..."

An edition of Confederate Veteran gives a first-hand account with additional details of this action and the cadet corps.

The cadets also aided in the defense of Alabama against an invasion by enemy forces. This included an unsuccessful attempt to defend Tuscaloosa, and the campus itself, from a raid by forces commanded by General John T. Croxton.

The service of Storrs' company, and other cadets at the university, has been recognized, even celebrated, multiple times in the state since the war.

A 1903 letter from Commandant of Cadets Dr. James Murfee provides an interesting perspective of the service of the university corp of cadets (beyond just Storr's company.) The author of the article acknowledges that part of the motivation for the letter was "probably in the interest of securing such honors and benefits as the state was bestowing upon its Confederate veterans." The letter describes some of Dr. Murfee's memories of the corps, though it may be fair to question the details as he remembered them almost 40 years later. He also recalled, or at least shared, only positive memories, which is natural, but perhaps slanted to help aging veterans prove their service was officially of the Confederate variety, not just a local or state militia.

Eleven years later, a marker describing their service was dedicated. The language is a bit more flowery and romantic than just a retelling of the facts. As with all such markers, it is important to consider the source of the story it tells. (I find "obedience to state" to be an interesting phrase and concept.)


Its text:  The University of Alabama gave to the Confederacy - 7 General Officers, 25 Colonels, 14 Lieutenant - Colonels, 21 Majors, 125 Captains, 273 Staff and other commissioned officers, 66 Non-Commissioned Officers and 294 Private Soldiers. Recognizing obedience to state, they loyally and uncomplainingly met the call of duty, in numberless instances sealing their devotion by their life blood.

And on April 3, 1865, the Cadet Corps, composed wholly of boys, went bravely forth to repel a veteran Federal invading foe, of many times their number, in a vain effort to save their Alma Mater, its buildings, library and laboratories from destruction by fire, which it met at the hands of the enemy on the day following.

To Commemorate this heroic record this memorial stone is erected by the Alabama Division, United Daughters of the Confederacy. University of Alabama May 13, 1914.
---

Two years later, a marker was placed on campus in honor specifically of Storr's company. 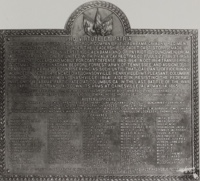 It reads:  Capt. Charles P Storrs Cadet Troop. Company F, 7th Alabama Cavalry C.S.A. organized in June 1863 under the leadership of Cadet Capt. Storrs; made up of cadets from the University of Alabama and of patriotic young men from Montgomery and vicinity; united with 7th Ala. Cav. Regt. As Co. F, July 22, 1863. First stationed at Pollard and Mobile for coast defense, 1863-1864; in Oct. 1864 transferred to command of Gen. Nathan Bedford Forrest, Army of Tennessee and assigned to "Gen. E. W. Rucker as escort, serving as such until that gallant officer was wounded in Dec. 1864; engaged at Johnsonville, Henryville, Mt. Pleasant, Columbia, Spring Hill, Franklin and Nashville, 1864; aided in resisting the Federal invasion of Alabama; participated at Columbus, Ga., In the last battle of the war, April 16, 1865; and laid down its arms at Gainesville, Ala., May 14, 1865.

“The unconquerable tenacity, the brilliant valor of these boys, who faced and fought all odds, until their ranks were cut to pieces, excited general notice and praise.” - Jordan’s Campaigns of Forrest,
1868

Placed by survivors and friends in honor of the devoted service, signal valor and noble record of this company.

The university later commissioned a painting, Alabama Corps of Cadets Call to Battle, from famed artist John Paul Strain, to commemorate the 145th anniversary of the cadets' defense of the campus. The image of the painting is from the artist's website, Johnpaulstrain.com, which includes a description of the fighting, showing the cadets in a positive light, focusing on their bravery against overwhelming odds. 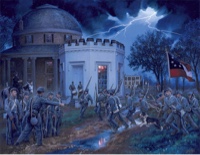 John Stewart Hart survived the war. In 1870, he was living with the Hodge family in Plano, Collin County, Texas and working as a farm laborer. Also in the house was 21-year old Elisabeth Dudley, who soon became John's wife. This happened when they married on July 28, 1872 in Van Zandt County, Texas.

By 1880, he was a farmer living in Dennison, Texas with Elisabeth and sons John, Eddy and Benjamin. Records on a family genealogy website and ancestry.com show that the Harts moved to Florida, possibly Hillsborough County, where they had two more children, Carolina Falconer, born in 1883 and Hugh Henry, born in 1885. Benjamin had been born in 1880 in Texas, meaning the family moved between then and 1883. (John Jr. was born in 1871 and Eddy in 1873.)

As noted in other posts in this series, the Hart family frequently named children after other family members. Four of this branch of the family's children - John, Eddy, Benjamin and Carolina Falconer - were further examples of this tradition.