Postcard From the Past: Reunion of the 9th Ohio Volunteer Infantry 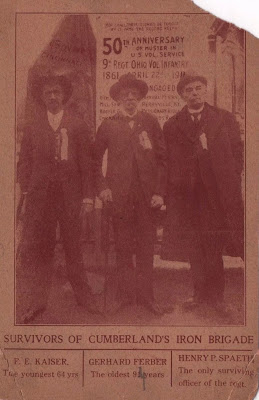 I recently acquired this neat old postcard and after discussing it with a friend who is interested in the 9th Ohio Volunteer Infantry (9th OVI), decided to look at it more closely and discuss it here.

The unused card is in far from mint condition, but is still in good enough shape to be readable. It is unlike any other postcard I have or have even seen, and certainly different than what modern postcards show. Both the image and the amount of text on it are different than today’s cards.

It is not a surprise that this group had a 50 year reunion of their mustering into the army. People have always liked reunions and this occurred during the age of the Grand Army of the Republic (GAR) and other groups of former soldiers. Civil War veterans were quickly aging or passing away, so events like this were not uncommon. It is cool that they took this picture with these honorees, but turning it into a postcard seems a strange thing to do, though as a lover of history,  I’m glad they did and that it has survived the past century.

The card shows the men standing in front of a hard-to-see background, apparently a sign or banner, which includes the event name as well as a listing of the unit’s battles, much like regimental flags showed. It does look like somebody wrote in some letters to complete words that may have been hidden behind the men.

The following two lines appear at the top of the background image:
Nor shall their glories be forgot,
While fame the record keeps.

These lines are a slight rewording of two lines from the poem “Bivouac of the Dead” (written by
Kentuckian Theodore O’Hara after the Mexican War.) They also are similar to lines I’ve seen on various GAR postcards, naturally focusing on the courage, victories and patriotism of those being honored.

The men are wearing dark suits, each with ribbons on them. The ribbons likely were specifically made for this reunion, as such decorations were popular at events like this.

None of the three men featured the long, thick facial hair that many Civil War soldiers wore fifty years previously, but perhaps it was not coincidental that the safety razor had been patented just a decade before this reunion.

I really like that it includes the names and ages of the three veterans. So many old pictures have survived without identification on them, so it is great that this one fortunately is different. It is truly cool to have such facts included with the image.

Seeing the men’s names listed here naturally made me curious about them. I have been able to find out a few details about their lives and service

Frank E Kaiser was born June 6, 1843 in Germany. He enlisted in Company C of the 9th Ohio on January 1, 1864 as a private. He was discharged, still a private, on June 7, 1864, when the unit’s 3-year term of service expired. He may have also been in the 1st U.S. Veteran Volunteer Engineer Corps, at least according to the National Park Service’s Soldiers and Sailors list of Civil War soldiers. If so, his correct discharge date was apparently September 2, 1865 when that unit was mustered out. He died on January 14, 1928 and was buried in the Vine Street Hill Cemetery in Cincinnati.

Gerhard Ferber was a corporal when he joined Company F of this unit on April 22, 1861, in the aftermath of the firing on Fort Sumter and beginning of the war. This was when the regiment mustered in at Camp Harrison, before reorganizing as a 3-year unit at Camp Dennison. Ferber was apparently one of the original members of this unit, which at first had too many volunteers as it organized in the midst of a great patriotic fervor. He still was a corporal when he mustered out with
the regiment 3 years later. He had been born on September 29, 1820 in Germany and passed away May 31, 1917 in Cincinnati, where he was interred in Spring Grove Cemetery.

Henry Spaeth enlisted in  Company C of the  9th OVI on May 27, 1861. He earned promotion to 2nd Lieutenant on in September 1, 1862 and perhaps changed companies at that time, to Company D.  He earned further promotion to 1st Lieutenant in February 1864 and was discharged with the rest of the regiment on June 7, 1864. He had been born December 25, 1838 in Wertenburgh, passed away on March 23, 1922 and was buried in River View Cemetery in Aurora, Indiana. He also was  a member of the Military Order of the Loyal Legion of the United States.

The phrase “Cumberland’s Iron Brigade” at the bottom is especially intriguing. I had not heard it before and asked for some help with it. Thanks again to social media, a friend found that this appears to have been a post-War nickname, possibly self-given by regimental members to make them seem as tough as the men of the famous Iron Brigade of the Army of the Potomac. This is based on an remark and note in the book We Were the Ninth: A History of the Ninth Regiment, Ohio Voluntary Infantry, April 17, 1861, to June 7, 1864, by Constantin Grebner, translated and edited by Frederic Trautmann (1987).

The 9th OVI was a nearly all-German regiment recruited in Cincinnati, apparently the same city where their reunion took place in 1911. Here is another picture from that reunion, from a regimental history site. That site has much more detailed information on this entire unit and its history than this entry will describe. 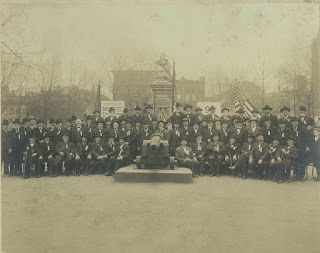 The book Cincinnati Germans in the Civil War, translated by Don Tolzmann discusses this unit briefly and here are a couple more sites that have some good information on this unit.

I never know what will attract my interest about the Civil War or specific pieces of it. In this case, it was a bent-up, torn old postcard that caught my attention and turned it one of the fascinating local units of the war. I’m sure I’ll start paying more att3ntion in the future when I see references to the brave men of the 9th Ohio Volunteer Infantry, as well as to other postcards I happen to see.