Book Review: Lincoln and the Power of the Press: The War for Public Opinion 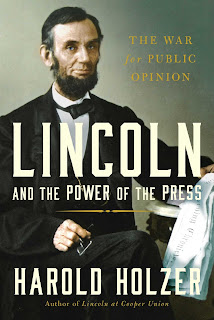 Lincoln and the Power of the Press: The War for Public Opinion
Author: Harold Holzer
Copyright 2014
Simon & Schuster


Abraham Lincoln fathered many famous quotes, speeches and lines. Among the most well-known is his claim that "In this age, in this country, public sentiment is everything. With it, nothing can fail; without it, nothing can succeed.”

In Lincoln and the Power of the Press, author and Lincoln historian Harold Holzer explores how the nation's sixteenth President acted upon this belief and how his feelings and actions on this belief compared to those of other politicians and journalists during the years before and of the Civil War.

In number of pages (over 500), this is a long book, but the writing style and smooth flow make it a quicker read than it appears. It is a well-researched and well-written book, with a lot of information on many individuals as well as society at the time. It includes endnotes and many photographs of people mentioned throughout the text, as well as images of period political cartoons about these men. The book consists of two sections, “the drumbeat of the nation” and “uncivil wars,” basically prewar and wartime sections, a logical arrangement for this topic.

Holzer’s book is a comprehensive look at how important newspapers were in the mind (and career) of Abraham Lincoln and how Lincoln spent his entire political career, from its humble origins in Springfield all the through his term in Congress and the Presidency, cultivating and maintaining his relationships with a wide variety of editors and reporters for many publications, especially, but not only, politically-friendly papers. His rivalry with Stephen Douglas included fighting for the type of coverage Douglas received in the press. This book goes on to show how Lincoln eventually received all the attention he craved and more, both positive and negative, and how he managed relationships with the newspapers and newspapermen to try to shape public opinion.

The author further demonstrates that Lincoln was far from alone in this desire, as many politicians and journalists in this era shared Lincoln’s belief in the “power of the press” and, in fact, many journalists aspired to become politicians, or at least benefit from the support of career policy makers. The stories of Horace Greeley and Henry Raymond especially illustrate this point.

This work explores the personalities and careers of the most powerful and influential editors of the day, focusing largely on Horace Greeley, James Gordon Bennett, and Henry Raymond, the operators of the New York Tribune, Herald and Times respectively, though other editors also had influence. The comparison of Lincoln and Greeley’s backgrounds and communication styles and abilities is an interesting secondary tale in this work.

A general overview of the operations of the newspaper business of the era is a key piece of of Holzer’s book. This includes the large number of newspapers that ambitious men started throughout these years, how technology in printing (faster presses) and method of receiving news (telegraphs, railroads, use of ships) made the war between papers more intense as they rushed to best each other with fresh scoops. It also describes how editors used different sized and priced newspapers and new sales methods to increase sales. The development of news sharing services like the Associated Press was another step forward in the business. This work also discusses other aspects of the business, such as how and why the population and money center of New York was the home of the biggest early newspapers. For those who sense an “east coast media bias,” perhaps in the coverage of modern sports, this book gives a glance at how such a focus on the east developed.

In addition to demonstrating how Lincoln and other politicians desired attention from the press, this work describes how they tried to control much of that coverage. Lincoln, for instance, secretly owned part of a German language newspapers in the late 1850s, and other politicians financially assisted journals that supported them editorially. Lincoln also frequently visited local newspaper offices to meet and talk with the editors, especially in small Illinois towns. Of course, by the end of his career, it was the editors and reporters who sought to visit Lincoln for attention instead of the other way around.

Lincoln also wrote anonymous articles and editorials for various newspapers. Holzer retells how Lincoln almost ended up in a duel due to such an anonymous piece, but also describes how the future President continued to submit unsigned works to newspapers even when in the land’s highest office, perhaps one of the lesser-known aspects of his career.

He wrote private letters to editors as replies to some of their critical commentaries, but was especially effective with the public letters he sent to these journals, such as his response to Greeley or his Conklin letter. A good summary of Lincoln’s attempts to manage such coverage occurs on page 474:  “Lincoln was never more successful in controlling the newspapers than when he wrote the newspaper copy himself.” This was one way Lincoln used the press to help mold public opinion instead of relying on the editors’ words and opinions.

Civil liberties, including freedom of the press and free speech, are another common topic of Civil War studies, with debate on how such freedoms were handled during these years, especially in the North. Holzer explores various newspaper suppression and censorship issues during the war, showing how some times, such as immediately after the first Battle of Bull Run, witnessed a higher amount of suppression, but other times, such as before the fall 1862 elections, saw fewer such instances. He discusses occasions when Lincoln may have been able to step in and help editors or newspapers more than he did, but also times when perhaps the Union policy (and thus Lincoln’s) was more lenient than it could have been. Lincoln often allowed his military leaders to do as they thought necessary, with the more successful generals having more leeway than others, but also took his own actions of suppression when he thought it necessary.. Holzer strongly shows that there really was not one clear, definite and consistent policy on what would be allowed or prohibited, which made it difficult for editors to know what they could publish safely. It was a difficult time for newspapers, especially those opposed to the war and/or the administration, as well as for the government which tried to balance freedoms with security and giving aid or relief to the enemy, many of whom lived in Union states. This book  also discusses instances of similar censorship in the South, showing it was not just an issue for Lincoln and the Union side. The whole concept of  “civil war” made this issue difficult to handle and this book impressively illuminates those difficulties.

The book concludes by discussing newspaper coverage of the bloody fighting in 1864 and that fall’s presidential campaign. The integration of politics and press was never more obvious than during this time when newspapermen Henry Raymond and Augustus Belmont presided over the National Union and Democratic national conventions. The pessimism that Lincoln and his supporters, including those in the media, felt was a major sentiment of this time and Holzer makes a keen observation when he notes the irony that that much of the press’ pessimism disappeared after Atlanta was captured – by William T. Sherman, a well-known hater of reporters and newspapers

This is a fascinating book, going into many more details than this review can cover, and is definitely a valuable part of any Civil War or Abraham Lincoln library. It is one that I honestly wish I had read sooner, but am glad to have done so now. This is a highly enjoyable, informative, and recommended book.