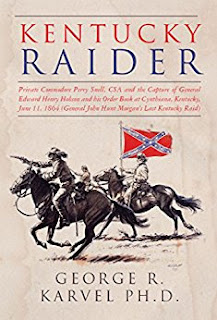 
The subject of my next book review is another book that discusses Kentucky in the Civil War. Even though this volume is not specifically about Kentucky, the story it tells is of a Kentuckian and of raids and battles throughout the Commonwealth, focusing on the raids of famous Confederate General, and Kentuckian, John Hunt Morgan.

Commodore Perry (C.P.) Snell, the great-great grandfather of the author joined the 2nd Kentucky Cavalry, under Morgan's command, in mid-1862. He served for the next three years, surviving Morgan's Christmas Raid, Great Raid and Last Kentucky Raid, as well as two instances of being captured. He was able to escape his captors and return to his unit both times, though his name confused Federal soldiers who thought "Commodore" was a title not a name. Snell apparently provided a false name as "Charles P.” more than once, perhaps to avoid this confusion. His name shows up as this "nom de guerre" in more than one official U.S. form. (The author does a good job of explaining the background of Snell's name and how the original Commodore Oliver Hazard Perry had inspired people to name children, including C.P. Snell, in his honor, early in the book.)

This book briefly describes each of the raids in which Snell took part. It is not an in-depth look at the details of these invasions, but that is not its goal. The synopses the author provides of these raids do give good  background information about Snell's experiences and make this book better.

The book is well-written and organized. I did not notice any proofreading errors and the writing style was very readable. It is a quick, informative work.

After discussing Morgan's capture in 1864, the book reaches the heart of this story, the order book that Morgan had captured from Union General Edward Hobson the day before his (Morgan's) capture. It then publishes each entry from this book. Most are short, usually a sentence or two, which makes for rather choppy reading, but this provides real examples of how such officers wrote their
orders. Additionally, the author adds good descriptions for these orders. These clarifications explain the orders and the military situations. This was a very helpful and valuable part of the book, adding an understanding of what the officers were doing and why.

Karvel addresses Snell's military career and his parole at the end of the war,  and then describes  Snell's post war life as much as surviving evidence allows. He tells that Snell found a new love interest during the war, despite already being married, and how he soon divorced his wife when he returned home. He notes that 1870 census records and Snell's will show that Snell had enjoyed good financial success and discusses how this may have happened. He mentions some rumors and family stories that may explain Snell's prosperity, as no official record seems to provide answers. This was an unexpected and fascinating section of this book.

The book includes footnotes listing sources and six appendices of background information on Snell's family history and family military background, a glossary of terms and other information. It also features several helpful maps at appropriate places in the text.

This book is a good, quick read and recounts an interesting story about the captured order book, what information it contained and how it came to the author's family. Morgan and his raids are popular topics for books and discussion, but George Karvel has found a new story to tell about this part of Kentucky's Civil War history. I gladly recommend this book.