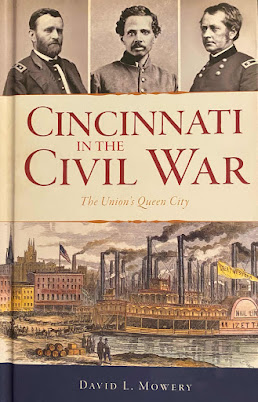 Cincinnati in the Civil War: The Union’s Queen City

David L. Mowery
Copyright 2021
The History Press
I admit my reading of books has been too slow in the past year or two, but I did just finish an enjoyable and informative book, one about a local topic.
David Mowery’s most  recent book, Cincinnati in the Civil War,seems like a fairly short book, 279 slightly undersized pages before the end-notes and index in the hardback copy I have, but is full of information and details about Cincinnati and even the northern parts of Kenton and Campbell Counties in Northern Kentucky. (Campbell County is my lifelong home.)
As I first heard of and purchased this book, I thought I had a good grasp on the basics of this subject, and though perhaps there was some accuracy to that egotistic belief, this work showed me just how basic that understanding was no how much more there is to Cincinnati’s Civil War story, far beyond the “Siege of Cincinnati” which was the subject most familiar to me.
This book is quite readable, with a nice flow to it, and the various photographs and illustrations add more perspective to how Civil War Cincinnati appeared. The pictures of buildings long gone are especially intriguing (though perhaps additional illustrations of the forts and batteries constructed for the late 1862 panic may have contributed more to this work.)
The seven main chapters of the narrative do a terrific job of covering just what the title says, starting with the coming of the war, to concerns about Cincinnati's location near slave-state Kentucky, the importance of defending the city, then an apt description of the "Siege," followed by discussions of other southern support or threats north of the Ohio River and finally the ending of the war. It is not a review of the entire Civil War - it is a detailed look at one area's experiences in the war, the war's effects on that area, and, most of all, Cincinnati's impact upon the war. This book is exactly what its title says it is.
The seven chapters of the main text are followed by five separate appendices, touching on topics such as ship-building in Cincinnati, regional war-time fortifications, a very educational (at least to  me) look at the locations of Civil War sites in the area (even noting the locations of buildings, camps, etc. that no longer exist), a history of Spring Grove Cemetery and listing of notable period figures interred therein, and a table listing Civil War units in which men from Cincinnati (and its home of Hamilton County) served, noting which companies, regiments or other units were composed mostly of these men. The inclusion of so many people snd -laces in this section really adds a lot of value to the entire book.
The book’s organization - the narrative description of the subject as included in the book's title, followed by the appendices, more focused on specific subjects that had contributed to the bigger story of the city's part in the war - works wonderfully.
Overall, I enjoyed this book because of the information it provides (and, perhaps selfishly, because of ideas it gives me for my project that I have discussed here.) It is, practically, a must read for those interested specifically in Cincinnati Civil War history, but is also a valuable work for other Civil War and local history enthusiasts. I certainly recommend this book.