Yesterday was the 150th anniversary of the letter from Grace Bedell to Abraham Lincoln in which she suggested he grow a beard. Her suggestion was not the only one in a similar vein that he received, but it certainly is the most famous.

Here is a link to a story in the Observer of Dunkirk, NY about the letter.  It includes the text of her letter, which I have printed below.

Hon A B Lincoln

Dear Sir
My father has just home from the fair and brought home your picture and Mr. Hamlin's. I am a little girl only eleven years old, but want you should be President of the United States very much so I hope you wont think me very bold to write to, such a great man as you are. Have you any little girls about as large as I am if so give them my love and tell her to write to me if you cannot answer this letter. I have got 4 brothers and part of them will vote for you any way, and if you will let your whiskers grow I will try and get the rest of them to vote for you you would look a great deal better for your face is so thin. All the ladies like whiskers and they would tease their husbands to vote for you and then you would be President. My father is a going to vote for you and if I was a man I would vote for you to but I will try and get every one to vote for you that I can I think that rail fence around your picture makes it look very pretty I have got a little baby sister she is nine weeks old and is just as cunning as can be. When you direct your letter direct to Grace Bedell Westfield Chatauque County New York 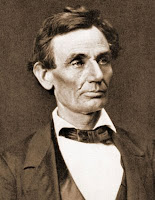 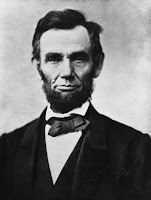