Today, October 8, 2010 is the 148th anniversary of the bloody, hard-fought battle of Perryville. On this date in 1862, thousands of men, on both sides, put forth tremendous efforts and showed incredible courage along the hills and valleys in Boyle County, Kentucky, and this post is in honor of them.

I acknowledge I've been "Perryville-centric" this week, but it seems only appropriate to recognize the ferocity and importance of this battle in the Western Theater today. I will not go into details about the actual battle on this post, but will share a few links to some sites that provide fascinating information about it and that describe it much better than I can.  I probably have shared some of these links before, but find them to be worth exploring again on this day.


(I do admit a "parochial" approach to my posting about this battle too - as a native Kentuckian, I do take some pride in having such an important battle fought on Bluegrass State soil, the largest one in this state. I certainly do enjoy studying how the Civil War had an impact in the area where I have lived my entire life and this blog will probably reflect that frequently. My interest in the war itself sprang from a childhood fascination that started when I learned Abraham Lincoln was born in the Commonwealth.)

Though it often gets overshadowed by more famous fights at 2nd Bull Run and then Antietam, Perryville has also been viewed as the "Confederate High Water Mark of the West" though that moniker is also rooted in the Eastern Theater, attached originally to the fields at Gettysburg before the "of the West" extension was added.

First, here's a link to a previous post I made about the Battle of Richmond, with some other links to information about the early stages of the Confederate invasion of Kentucky, the campaign that culminated at Perryville.

This link from the Civil War Preservation Trust will lead to several good articles and informative stories on this battle.  I especially enjoy this interview  with Kenneth Noe. I found it to be very interesting, but the other stories and links on that site are terrific as well.

I really like the Battle of Perryville.com site. The battle chronology link in the column on the left is especially helpful in understanding how the battle unfolded over the course of that bloody day. I studied that quite a bit before my spring-time trip to the Perryville Battlefield State Park, but this entire site is a valuable reference.

Perryville Battefield.org is another fine site and reference, with more emphasis on the park in current times, such as current events and preservation, instead of just the actual battle itself.

I found some good pictures of the battle ground at a Civil War Album.com site, with good descriptions of what each scene shows.

Earlier this week, I made two entries about one of the the brave men who gave his all at Perryville, William Rufus Terrill   (see also the follow-up post ). Before researching those entries, I knew a little about Terrill, such as he had a brother on the Confederate side, but did not realize he was so young or that his decision to support the Union was so painful. His fistfight with Phil Sheridan was news to me too.

In late May of this year, I finally made another trip to this Boyle County land and recorded these thoughts about that day. I also posted some photos from my trip on photobucket, though I never did go back to caption them.

I especially find the below photo to be quite haunting in a hard-to-describe way. It does not exactly show a battlefield overrun by modern sprawl, but the water tower in the distance, staring down upon the cannon like a flying saucer in the sky, (or like one of these aliens from Star Trek the Next Generation )  certainly provides a sign of encroachment over the rolling hills of this beautiful battlefield. This structure certainly dominates the view of this section of hallowed ground.and  may hint at what could come in the future if the Commonwealth of Kentucky is not careful about its historic jewel. 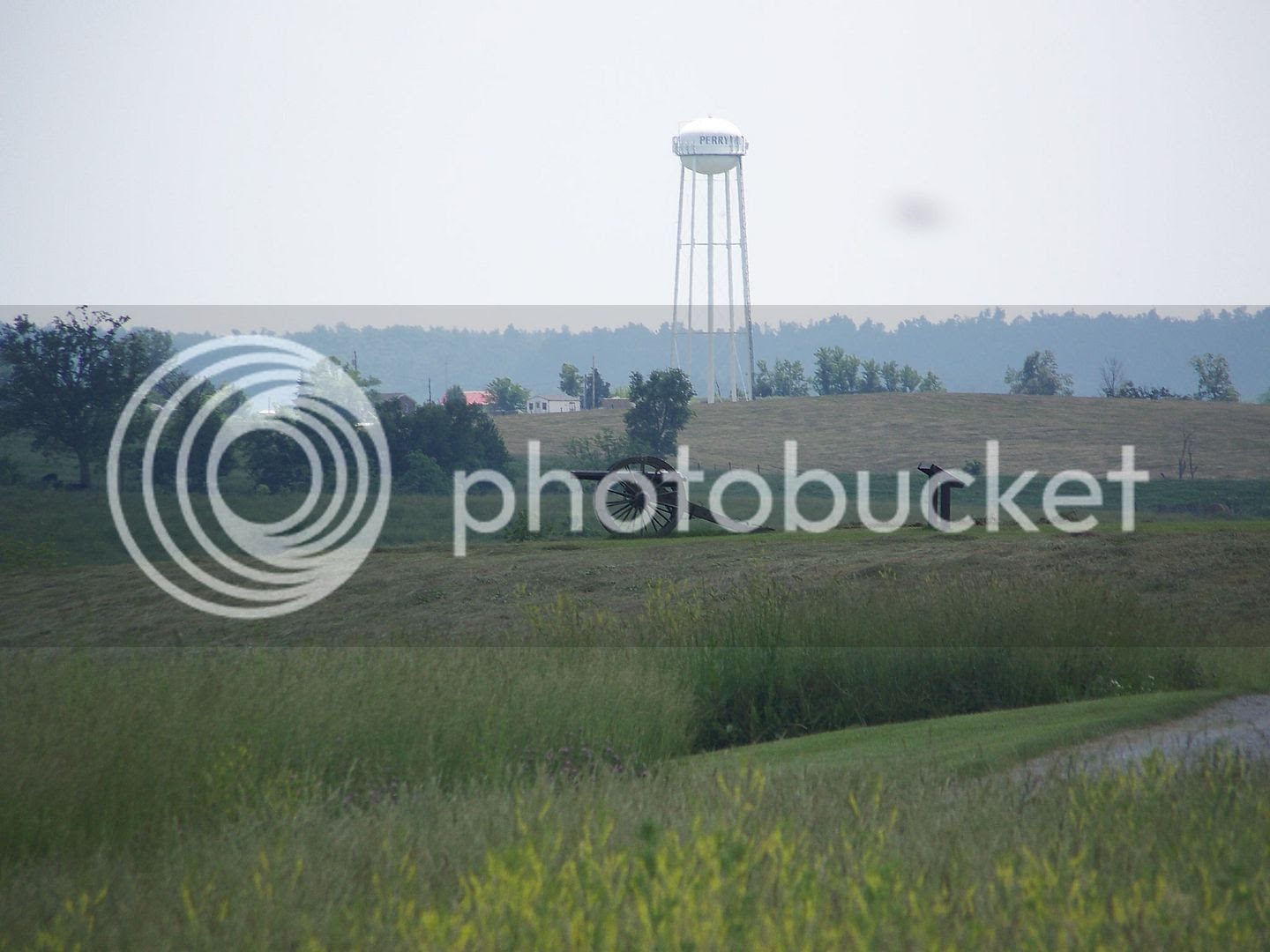 You can visit the Friends of Perryville site to find more information on how to help support preservation of this ground, or, from a national perspective, theCivil War Preservation Trust is a wonderful organization to support as well.

I end with a couple appropriate lines from the Gettysburg Address that speak of the need to preserve and respect such land much better than I ever could.