In the early months of this blog, I posted an entry describing how I thought some of the words of My Old Kentucky Home might apply to the life of Abraham Lincoln and his family. I thought it was kind of an original thought as I had never seen his life connected to that 1853 song.

Recently, I acquired a couple of old postcards, including the one pictured here. (Note how awful the image of Lincoln is on it. The red lips, especially, give it a rather feminine look, though the smooth wrinkle-free forehead adds to the strangeness.)

The handwriting that is visible on the front of this card (dated on Lincoln's birthday in 1915, as the bottom right corner shows)  says "A little song of Lincoln on other side. It is very easy. Perhaps you will enjoy it."

The other side is filled up with more writing, i.e. the lyrics that the front referred to. These lyrics are about Lincoln and set to the tune of "My Old Kentucky Home," showing that what I believed were my "original" thoughts about this song and Lincoln had been conceived 94 years earlier.

Unfortunately there is no identification as to the writer of these words or to whom this card was being sent, but I'll go ahead and transcribe the lyrics below.The writer clearly was a Lincoln admirer, 50 years after the President's death

(For those unfamiliar with the melody of this song - have you not watched the Kentucky Derby? - here's a youtube version of it that I like, though this one is quite long, trying to show all the pictures. The song usually has two verses and a chorus sung, though like The Star Spangled Banner it does have other, less familiar lines as well.)

'twas a cabin rude in the wilderness afar
Where Lincoln, the hero was born
The stars shone bright, o'er the little home at night
And the wild birds caroled in the morn.

Though hard times came there was courage in the home
And Lincoln the boy, like the man
In all thins said though the tasks of life were hard
I might do the very best I can

(Chorus)
Ring the bells of honor
Oh ring them loud to-day
We will sing one song for the boy who did his best
In the old Kentucky home, far away 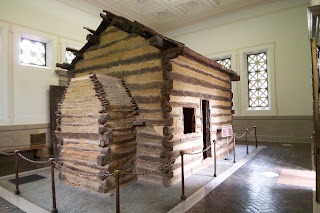