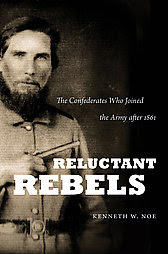 Reluctant Rebels: The Confederates Who Joined the Army after 1861
Kenneth W. Noe
copyright 2010
University of North Carolina Press
Book Club edition
Civil War America, Gary Gallagher, editor
Studying motivation of why soldiers fought in the Civil War has become a more popular topic as time has passed, with several prominent scholars offering different thoughts, opinions and perspectives on the reasons men risked their health, lives and futures in the 1861-1865 conflict.
Among the most recent historians to discuss this area of study is Kenneth W. Noe, Draughton Professor of Southern History at Auburn University. In Reluctant Rebels, he chooses to focus on men who joined the Confederate army in 1862 or later, after missing out, skipping out, ignoring or otherwise not giving in to the rush of volunteers who signed up soon after the firing of Fort Sumter and Lincoln's call for troops.

Noe uses sources from and about 320 soldiers he identified as late enlistees and digs through their war-time correspondence as well as census and tax record information to compare them to the men who had enrolled earlier, in demographic information and,their motivation for joining the army.

Throughout the book, he compares the demographics of the later enlistees to the "first responders" as we might call them today, and also looks at their level of motivation due to subjects like patriotism, Confederate nationalism, defense of slavery, political ideology, peer pressure (or sexual intimidation) from others, especially women at home, bounties and conscription. He also nicely describes the ties that these later fighters kept to their homes and the importance of their messes, relatives and other small groups of comrades that they formed once in the army.

I enjoyed the way he did this and found it to be very informative. It is not always the smoothest narrative, but expresses Noe's findings very well and in a manner that makes sense. It can be difficult to write a readable analysis of that style, frequently relying on statistics and numbers,  but Noe accomplished this and produced a book that is very readable and enjoyable, as well as informative. (By the end of the book, several of the soldiers whose writings he used become very familiar and the reader - or at least this one - starts to know what type of feeling to expect when their names show up in the text.)

Dr. Noe also consistently compares his findings to what many of the authors who tackled this are before him claimed, and showed how they compared and contrasted, both in the differences between the soldiers and the emphasis on various aspects that each author used. In this sense, it is a bit of  historiography on soldier motivation (including a good discussion and many examples of the three main types of motivation that historian John Lynn had helped describe - initial motivation, sustaining motivation and combat motivation. This was a new topic to me and one that I find fascinating and will try to consider when doing future reading about the war.)

At the end of the book, he includes four tables from his database of information, showing more detailed numbers of the issues discussed throughout the book. This work also includes end notes and a long list of works cited.

Reluctant Rebels is a fine book that Civil War students or enthusiasts interested in why the soldiers fought and kept fighting should read. It describes many of the possible motivations these men had, first not to enlist, then to (finally) join the thousands of others who had gone before them and, finally, why they continued to fight. It is very informative and enjoyable and a book I am happy to recommend.