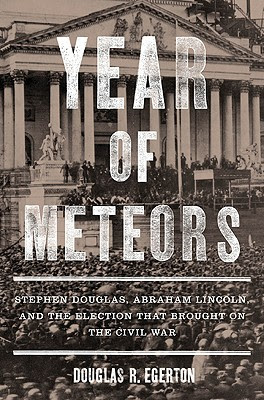 I had heard some very good reviews and comments about Douglas R. Egerton's recent book Year of Meteors, so it was with great anticipation that I finally grabbed this volume from my shelf and read it for myself. I was not disappointed.

In this work, Egerton discusses the 1860 Presidential election, discussing the many candidates, parties, platforms, hopes, wishes and goals involved in the long, controversial process.

This is a very readable and informative book. It describes this famous election as one expected to feature Stephen Douglas of the Democratic Party and William Henry Seward for the upstart Republicans. Things did not work out that way and Egerton shows how and why such changes occurred.

Discussing the motives of fire-eaters, particularly William Yancey of Alabama and Robert Barnwell Rhett of South Carolina, the author shows how the Democrats could not agree on one candidate, as the northern members of the party supported Douglas and his popular sovereignty and Freeport Doctrine beliefs,  while southern members believed those positions were too similar to abolitionist beliefs and fought for more stringent guarantees of and protection for slavery. Eventually, the party split and Vice-President John Breckenridge of Kentucky became the choice of the Southern Democrats, while Douglas ran under the banner of the Northern Democrats, both sides claiming to represent the national party's interests. For some party members like Yancey and Rhett, this was not a bad thing.

Such controversy did not affect the other parties in the race, at least not with the same intensity. Egerton discusses how Seward was viewed as too radical, even as he gave more conciliatory speeches as the year unfolded, and how the ability to win states like Indiana, Illinois and Pennsylvania convinced many Republicans that a different candidate was needed. Men like Salmon Chase and Simon Cameron had their names mentioned, but in the end some clever maneuvering by his campaign leaders led Abraham Lincoln to win the party's nomination and be the unexpected challenger to the Democratic party's choice.

Egerton also describes a new party that formed for this race. This was probably my favorite part of the book, and at least was the most informative to me, as he discussed how Kentucky Senator John J. Crittenden tried to find a compromise between the positions of the Republican and Democratic parties. This eventually led to the formation of what was called the Constitutional Union party, with John Bell as its Presidential hoperful. Egerton's descriptions of how this party tried to run without a platform and to virtually ignore the issues surrounding slavery and the territories was eye-opening to me. I knew this was a conservative party,but never realized that they basically wrapped themselves in patriotic images and symbols,  while paying no attention to the major political issues of the day, fearing that such discussion would only inflame tempers. Maybe they were right about the issues causing anger, but the description of their virtual "hear no evil, see no evil, speak no evil" approach really makes this party seem out of touch with reality and it is hard to comprehend how they could consider themselves a serious party. (Of course, I've since read other information that indicates the Whigs used a similar strategy in 1840 and even 1848, so maybe it was not as unusual as I thought.)

Egerton discusses other minor parties and candidates as well, such as Gerrit Smith and the Free Soil party, but focuses on the four main parties that captured most of the attention. He shows that the break-up of the Democratic party was no accident as several of the fire-eaters wanted to ensure a Republican victory as they thought that would lead their states to secede from the Union. Little did they realize the amount of pain and suffering that the split nation would suffer in the upcoming years.

One constant throughout this book is the importance of slavery and how the government related to and/or controlled it. Slavery is the dominant issue in this book, with men like Rhett and Yancey offering demands for its protection (the Alabama platform) and even men considered more moderate, like Jefferson Davis, insisting upon the rights of this institution to exist. Some mentions of southern hopes to acquire more territory for slavery pop up in this book, and virtually every discussion of political argument mentioned here is on this subject.

I really enjoyed this book and found it to be well-written, with a good flow to it. It describes the many different perspectives of the election, bases on records of the men who established said perspectives and does an excellent job of telling the story of how this election unfolded, from each party's selection of candidates to the election itself. It is a very fine book and I recommend it highly.