Let's Talk About it: Making Sense of the Civil War 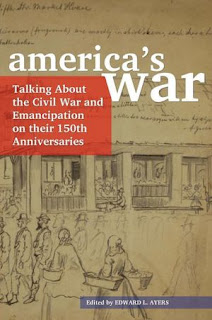 I have been fortunate enough to participate in the Let's Talk About It: Making Sense of the Civil War  series at the Boone County Public Library. It was one of only 65 libraries in the country (2 in Kentucky) to receive a grant to participate in this program offered by the National Endowment for the Humanities and the American Library Association.

We have had two sessions so far, with three more scheduled on the first Wednesday of every month. I hope winter weather will not be bad on those days as I would hate to miss any of the sessions.

The first session featured a theme of "Imagining War" and involved reading the novel March by Geraldine Brooks, as well as a brief reading from Louisa May Alcott.

For this past week, the topic morphed to "Choosing Sides" with several readings from America's War: Talking about the Civil War and Emancipation on their 150th Annversaries by University of Richmond President Edward Ayers.

I really found this month's readings to be quite fascinating. I previously mentioned Frederick Douglass' What to the Slaves is the 4th of July speech. It is very powerful and provides a terrific perspective of how Douglass interpreted American history as an African-American and former slave. The phrase "guilt trip" may be one possible way to describe it, as Douglass tried to make white Northerners see the separation of understanding of the country's history between his race and theirs.

I also found Henry David Thoreau's A Pleas for Captain John Brown to be quite fascinating. This was another new essay to me and Thoreau's unequivocal support for Brown impressed me. He did not hesitate to support Brown, though many Northerners, including the new Republican Party and it's supposed anti-slavery ideals, quickly criticized Brown's methods. (Thoreau had appeared in March in the previous session.) The question of Brown being either a hero or villain, martyr or terrorist still stirs debate more than 150 years later, but Thoreau strongly voiced his opinion even during the time when he knew Brown would soon be hanged.

Among the other readings were Abraham Lincoln's First Inaugural Address, Alexander Stephens' Cornerstone Address, pieces of a speech by Robert Montague supporting Virginia's secession and a speech by his colleague Stuart Chapman opposing secession. The last two did an excellent job of showing both sides of the argument. Both men supported slavery, but disagreed on how best to protect that institution.

The final three readings featured an excerpt from Elizabeth Brown Pryor's excellent Reading the Man, discussing Robert E. Lee's process of deciding to join the Confederacy, The Private History of a Campaign that Failed by Mark Twain and excerpts from the diary of a young Louisiana woman, Sarah Morgan, available as Sarah Morgan: The Civil War Diary of a Southern Woman. Re-reading the section on Lee and Pryor's additional thoughts she put together for this book provided a great view on how Lee approached his decision.

All of these readings were very valuable. At the meeting, the participants (about 35-40, same as the first meeting) broke into three discussion groups. The group in which I was involved talked mostly about Lee's decision and various aspects of it, but did touch on each of the readings, with several interesting points made and questions asked.

I am really enjoying this series and look forward to the next one in early January. Once this is through in March, though, I'm not sure what I will do. Hopefully I can find something at least similar to this in terms of discussion and participation and who knows, I may even make some friends and contacts in these sessions. I have enjoyed the people I have met so far.

If any readers have the chance to participate in this, please consider it strongly. It is fun and gives you the chance to hear other people's perspectives as well as questions that you may not think up on your own.