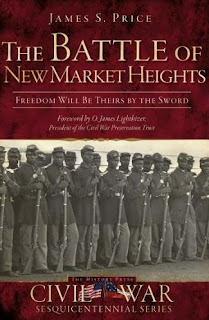 The Battle of New Market Heights: Freedom Will Be Theirs by the Sword
by James S. Price
The History Press
copyright  2011

One of the many blogs I follow and enjoy is Jimmy Price's The Sable Arm blog. His research and writing are very informative and valuable to Civil War scholarship. I really enjoy his writing on that blog and ever since he announced he would have this book published I have been anxious to read to buy and read it. I finally achieved that goal recently and admit that I am happy to have done so.

Throughout the text, he shows some of the challenges African-American soldiers faced in the Union Army, and how controversial general Benjamin "Beast" Butler became one of their biggest supporters. Butler gave them opportunity to show their mettle and he was quick to recognize their bravery and reward it by personally financing the Army of the James Medal. Even though the War Department never formally recognized this award, it was still a great honor to the men who earned it.

This book further describes how the units that ended up fighting in this battle were formed and discusses some of their early experiences as they became soldiers in the United States Army.This is very nice background information about this new source of manpower for the Federal forces.

As for the fight itself, Price describes the days leading to the battle, the many obstacles the soldiers faced on the actual battlefield, and how poor decision making by several of their leaders made their chore even more difficult. Among these obstacles were various entanglements of trees and branches, such as chevaux-de-frise. Additionally, the Confederates became motivated and even angry when they realized that the troops attacking them were African-American. The Union troops fought bravely and took many casualties, but they eventually managed to overcame these challenges and achieve success on the field.

This is a very well-written and enjoyable work. The narrative is very readable, and I especially enjoyed the many pictures and maps (by noted cartographer Steven Stanley) spread throughout it. These illustrations greatly add to the understanding of the text and the story it tells.

I do wish the author had spent more time refuting some of the arguments about this action not being as important as reputed. It is great that he showed that point of view, but I would have liked some more comments and views differing with that perspective and arguing for the importance of this battle and the justification for the awarding of the 14 Medals of Honor. I do not know why, but this section of the book left me wanting for more, though this admittedly is a small criticism of a book that I truly enjoyed.

The final section on the book, concerning attempts to preserve the land that made up the battlefield, is especially fascinating, exploring the many frustrations and few successes that preservationists have experienced through the years and decades. We hear many stories these days of preservation triumphs, but the land around New Market Heights and Chaffin's Farm is not, unfortunately, one of those great stories.

The Battle of New Market Heights is a very fine book, telling the tale of an important battle in the Union campaign to defeat Robert E. Lee's troops. African-American soldiers made valuable contributions to the Union war cause and Price's book tells the tale of one of the lesser-known fights in which their valor came to the forefront. It is a very good book for any Civil War student or enthusiast to have and I gladly recommend it.