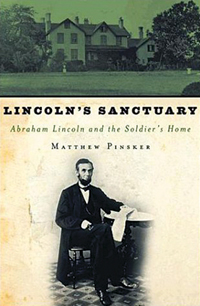 Another interesting book from a few years ago that finally found itself in my hands, Matthew's Pinsker's work is informative, interesting and very readable. It is a very good book that explores a different perspective on President Lincoln and his time in the country's highest elected office.

I apologize for resorting to such a cliche, but since it is so true in this case I must do so - with as much as  has been written about Abraham Lincoln, his life, his career, his family and other aspects of his life, it is surprising to find something different or new. Pinsker accomplished this difficult task,  thoroughly researching this book about the small summer home that President Lincoln and his family used during Lincoln's time in office.

On the outskirts of Washington D.C., this cottage was on the same land as a home for disabled soldiers who had no other place to stay. A few similar cottages were also located on this ground, a much more scenic area than the main areas of the city. During the summers of 1862, 1863 and 1864, Lincoln, his wife and their son Tad spent several months at this retreat, which had better ventilation and was much cooler than the more crowded areas around the White House.

Pinsker describes how Lincoln would ride into work every day on horseback, describing his most likely route. He also shows how the military eventually developed more plans for the President's security, including stationing troops around the cottage grounds and providing an escort for Lincoln, even though he did not always appreciate the need for such practices. Some of the men who helped guard or escort the President developed close relationships with him and these trips sometimes gave him the chance to discuss the issues of the day in a more relaxed manner. Some also wrote their observations down, providing some of the new sources Pinsker found in his research.

The author also demonstrates that Lincoln was frequently alone at the cottage, enabling him to use it to do work, as well as thinking about major decisions he had to make. Mary and Tad often took trips to the northeast during the times they had moved to the cottage, and their eldest son Robert did not frequent the cottage or spend much time with his father. Lincoln's family life and relationships are a nice secondary plot (for lack of a better term) of this story.

During these months at the cottage, Lincoln was considering major issues, such as emancipation and how to deal with General McClellan, and this sanctuary, as the title labels it, may have given him enough peace and quiet to reach the decisions he made.
Lincoln also conducted meetings at this cottage, and also hosted many different guests who found his somewhat hidden retreat.

Besides the actual story that Pinsker tells, I also appreciate the way he did so. His writing flows very well, making the book readable, but what stood out to me was how he discussed some of the sources he uses. Frequently, he would mention a story or report, describe the source it was from and then describe how accurate that source may be. This practice, a sort of historiography, is one I've often seen in end notes or in books specializing on the study of history, but seldom within the text of a work like this. Pinsker blends this analysis into the flow of the narrative very well, and it adds a lot to the book.

One example that I marked was on page 65 when the author discusses two sources that claimed that Lincoln wrote the Preliminary Emancipation Proclamation while at the Soldier's Home, as his sanctuary was known. He reviews a story from painter Frances B. Carpenter as well as one by Rebecca Pommroy, who often worked with the Lincoln family, particularly with child care. The analysis he provides and the conclusions he reaches about these sources do add to the credibility of the book, showing that the author did not simply believe and repeat every story he was able to uncover. This is something I have not seen often in such a book, but I really appreciated it and felt it was one of the strong points of the book. It was nice to see that within the text, without having to flip to the back and try to find the proper end note to see if it provided such information.

Overall, I found this book to be a pleasant read, as well as an educational one. Matthew Pinsker provides a new perspective on President Lincoln and his daily life, including the President's professional and family duties and experiences. It is common for authors to describe Lincoln and his career in the White House, but Pinsker shows that the President spent nearly an entire year at the cottage on the grounds of the soldiers' home and that this sanctuary did give the President time to make decisions, meet important visitors and spend at least some time with his family, while avoiding the crowds surrounding the White House. It was also a more scenic and comfortable home during the heat of Washington summers.

This cottage truly did provide sanctuary for the President, and this is a part of Lincoln's Presidency that deserves more attention. He spent significant time there and pondered (or even made) significant decisions while away from the White House. I unhesitatingly recommend this book to students of Lincoln or the Civil War as a different perspective on Lincoln and his life as President.