This advertising card is one of my favorite pieces of war-related (even if distantly) ephemera. It absolutely fascinates me that someone thought to use this picture of a sweet, innocent young girl to sell artificial limbs, though a google search found two other similarly strange subjects on cards from the same company. (I tried to save the pictures to use here, but they were blurry and not worth using.) Perhaps mine is not as different as I at first thought, but I still like it. 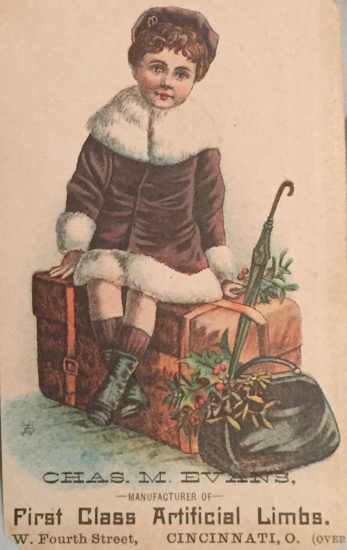 It does mention “U.S. Soldiers” can get a limb and transportation to the office for free, so apparently that excluded Confederate veterans, which does make sense since it apparently was a U.S. government program. I wonder if any ex-Confederates ever tried to benefit from this offer.

Google books has this information about the company. Mr. Evans had moved from St. Louis to Cincinnati, taking over business from a Dr. Bly, and had previously worked in New Orleans. According to this link (see image below), he moved to the address on this card in 1884, almost 20 years after the Civil War had ended. 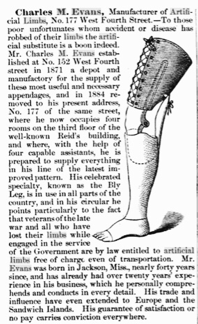