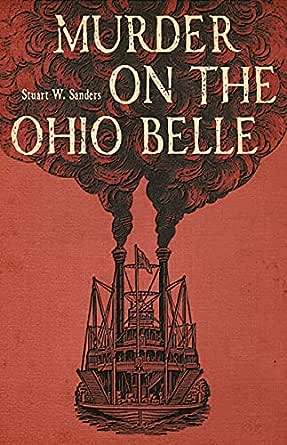 Murder on the Ohio Belle
Stuart W. Sanders
Copyright 2020
University Press of Kentucky
Murder on the Ohio Belle is not a Civil War book, but covers the war era including the generation of people who brought on and fought the war, thus making it a worthwhile read for those focused on the fighting years. Mid-nineteenth century culture is the main theme of this work, as seen through the experiences of one steamboat, its crew and passengers.
As its title implies, Murder tells the story about a killing (actually two) that took place on the steamboat Ohio Belle, but it goes well beyond that, serving as sort of a biography of mid-nineteenth century steamboat and American culture, or at least many aspects thereof.
This book starts with a strong introduction. Many works use such a start to explain the author’s goals for the book, but few are as straight-forward and effective as the this one.
The hope of this book is to “help us better understand nineteenth century riverine culture.” (page 2) It explores the relationship northern owned boats and their crews had with slavery and slave culture along the Ohio River.The phrase “fluid border” between free states and slave states was literally true, since the waters of the Ohio formed much of that border. The author shows that these boats profited from, and thus supported, slavery with the business they conducted in the south.
Sanders further pledges to explore“how Americans contended with violence” (page 3) such as murder, lynching, and warfare, and argues “the history of the Ohio Belle also presents a portrait of how western antebellum society embraced retribution.” (page 4)
This work considers a variety of period cultural issues, such as “interpersonal violence, slavery, honor culture, and retribution.” (page 4)
The introduction comes to a definitive conclusion: “A single event…can illuminate a more important, broader narrative about our past.” The plan is to show readers “important themes from the nineteenth century that are still relevant today” (page 5), such as vigilantes, injustices, and others.
“History, including the tale of a murder on a steamboat, still matters” is an apt final sentence to this introduction.
The book lives up to the promises and goals listed in its beginning. It does so mostly in a chronological fashion, but does jump ahead and back at appropriate times to tell the story fully.
This is not a long book. It has an introduction, eight chapters and a conclusion which combine to take up 111 pages, including the acknowledgements, but does also feature 30 pages of notes, some of which include information beyond the citations. This length, and the writing style of the author, make it a quick and easy read, so anyone worried about finding enough time to read an entire book should still consider this one.
Besides the telling of the story of the actual murders, and how it parallels mid-nineteenth century American behavior, this book also details the career of John Sebastian, the captain of the Ohio Belle, and how he dealt with those issues on his boat.
Another interesting aspect of this work is the story of Margaret Garner. Many people have heard or read  of her escape from slavery in Boone County, Kentucky, across the Ohio River to Cincinnati, where she killed her young daughter instead of letting slave catchers capture her. This book details more of her story after that incident, as she was sent downriver aboard a steamboat.This part of her story is not as famous as her attempted escape, but does include more heartbreak. Her tale was an unexpected but valuable addition to the study of the region's culture at the time. Few stories illustrate the nature of slave-state Kentucky’s proximity to the free state of Ohio as clearly as hers does.
Violence, revenge, honor, and the definition of a “gentleman” (and expectations of such a man’s behavior and interactions with others) are concepts that appear throughout the book, and are familiar to Civil War students. The use of alcohol, mixed with gambling and traits like pride, honor, and the tradition of carrying concealed weapons was a common contributor to problems, including occasional mob violence. This behavior on “the Ohio Belle, and other vessels was simply a reflection of behavior on land during this period.” (pages 58-9) This book provides examples of this, including in the river city of Louisville.
Class distinctions – particularly between wealthy planters and “lower” economic classes, but also between races – were ever present in how people behaved on land and water.
Of course, the defining event during the steamboat era of the mid-nineteenth century was the Civil War, and chapter seven dives into it, how it affected the Ohio Belle  (captured by the Confederacy) and John Sebastian (he lost his left arm during the conflict.) It was the ultimate example of violence during the era, but these years also continued to demonstrate the dangerous desire and search for vengeance, much like during peace time.
Overall, this is a fine book for anybody who enjoys history, but it also covers topics that should interest those focused on the Civil War, river history or social/cultural history in mid-1800s America. This book is a pleasure to read. I happily recommend it.