I have written frequently about Kentucky, even the northern Kentucky/Cincinnati area, on this blog in the past, since it is my home state and region. Here is another story from this area, a further example of the complicated nature of the war in this state. My next post will include a follow up story from the same paper.

I found this in the Cincinnati Enquirer of December 28, 1861.


Troublous Times in Warsaw, KY -Conflict between the Union Men and the Rebel Sympathizers - One of the Rebels Killed - Humphrey Marshall's son and Several Others Captured

During the past several months there have been frequent conflicts between the Union men of Warsaw and some of the rebel sympathizers residing in that vicinity, but on Tuesday last there was one of a more serious and fatal character than any that had preceded it. It occurred between John and Talbot Leonard (rebel sympathizers) and two men named Oliver and Clements, gunsmiths in Warsaw, and the former just back of the village. On that day the Leonards paid a visit to Warsaw, and, drinking pretty freely, made themselves disagreeable to the Union men of the place. Just before dark Clements and Oliver, who had been absent from the town, returned, and the former stepped into a store where the Leonards happened at the time to have made a temporary halt. Seeing the probability of a quarrel, which he wished, if possible, to honorably avoid, Clements immediately went out to the pavement, where he was followed instantly by John Leonard, with a pistol in his hand, who, applying to him a most opprobrious epithet, fired upon him. At the time of the shot Mr. Clements had his right hand in his pocket, and the shot taking effect upon it caused a fearful wound, the ball lodging between the thumb and forefinger, where it still remains.

Wounded as he was, Clements drew his pistol and fired twice upon his assailant, the first ball entering the lower portion of his left breast, and the other taking effect upon a lower portion of his body. He fell and expired almost immediately. By this time the brother, Talbot Leonard, had drawn his pistol and fired also, when Clements turned his attention in that quarter, and shot three times, the balls taking such effect that his life was considered as hopeless. Several other shots were fired in the crowd, among which Mr. Oliver, Clements' friend, received one, creating an ugly wound in his arm. The Leonards were taken to their houses, and with the evening mail-boat Messers. Clements and Oliver, accompanied by Mr. Vallandigham, a resident of Warsaw, came up to this city, to procure such aid as would hereafter preserve quiet in that town.

Intelligence of the strive being communicated to the military authorities here, General M. S. Wade sent forward a detachment of Colonel Whittlesey's regiment, quartered at Camp King, who left on Wednesday morning, and arrived unheralded at Warsaw on the same evening. After procuring the details of what had transpired, Colonel Whittlesey proceeded to arrest Lorenzo Graves, Judge of the County Court; Dr. A.B. Chambers, member of the Lower House of the Legislature; John J. Marshall, son of Humphrey Marshall, the Confederate General; and Hiram Baldwin, a hotel keeper in the town.

All the arrests were made so unexpectedly, and in so quiet a manner, that the town was barely awake before the prisoners were in custody, and were being marched in charge of a sufficient guard in the direction of the wharf-boat, no attempt being  made at a rescue. From the time of the landing of the detachment until the prisoners had been taken and were on their way up the river on the steamer Major Anderson, not an hour and a half had elapsed, the soldiers meanwhile retaining entire possession of the town.

On the arrival of the prisoners in this city (Cincinnati, home of the Enquirer) yesterday morning, they were marched to the City Barracks, on Elm street, where they will await an order from Secretary Seward. Colonel Whittlesey, with his detachment, will remain at Warsaw until he has orders to return to his regiment. 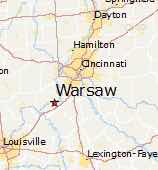 Location of Warsaw, from bestplaces.net