As I continue to plug along on my book project, a new, shorter-term but still intriguing idea has caught my attention.

At my local historical society, I found an old notebook of meeting minutes from the Henrietta Hunt Morgan Chapter of the United Daughters of the Confederacy. This chapter was in Newport and Covington, Kentucky, and this book covers late 1936 to the early 1940s.

I am transcribing these minutes of the meetings which usually occurred  monthly, though some were cancelled. Once done, I may do some research on some of the ladies whose names are in the book, perhaps to figure out which of their ancestors were Confederate soldiers. This research may even turn up new names of local soldiers for my book or posts for this blog.

The minutes are generally unremarkable, filled with details of when and where the meeting was and how the meeting opened and proceeded. Most of this is pretty similar to other meeting minutes even from  today, but I might have a post or two with observations about some of the traditions they followed to open their meetings.

A few of the entries make mention of topics still of note today, such as contributions to fundraising efforts for statues of Jefferson Davis and even one about donating southern literature to a local high school library, perhaps part of the "Creating a Confederate Kentucky" phenomenon that happened in the post-war decades. (Thanks to Anne Marshall's wonderful book for the title that describes this period so well.)  I may go into further details on those topics and perhaps others once I have finished transcribed the entire book. I am about halfway through and am going through about one entry every day or two, so I probably still have a few weeks left before this will be finished.

I have also seen a couple of mentions of soldiers' names, one who had passed away in a neighboring county and another who was supposed to go to the 75th anniversary of the Battle of Gettysburg. Those names may deserve more investigation also.

I am still working on my book, but this is a nice distraction and hopefully I can continue to work on both and make progress. This notebook is something different than anything I have done before and even the minutia of meeting details and the various motions made is intriguing to me. I started this post thinking I would say there was not much worth discussing in those minutes, but as I write this and describe what I’ve seen, the more I write, the more I believe will come from this. It won't be any groundbreaking  news on the Civil War era but may add to the (or at least my) understanding of this region in the post-war years and decades. This is something I will continue to pursue and see where it leads me.

This book also includes a couple of loose papers and a newspaper clipping. The loose forms include two applications (each marked "duplicate")  to join a different chapter of the U.D.C. and correspondence about opening a new grave in the Confederate section of a local cemetery.

Here are a couple photos of the book. 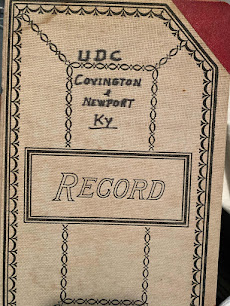 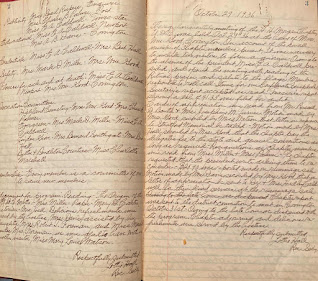